Tales of the Wicklow Hills

Available from most shops or directly from Richard Marsh

“The aim of this book is to record in written format the stories and legends of County Wicklow that have largely passed orally from generation to generation over the years. ... Some of the stories in this book are ones that I am sure all of us that are from County Wicklow have heard at some time, but may have forgotten about over the years, while others may be completely new. Whether they are new or familiar, I think that it is very important that they are recorded in this written publication to serve as a permanent record for ourselves and for future generations.” Ann Ferris, Cathaoirleach, Wicklow County Council

“[The book] expresses and represents Wicklow’s oral and literary heritage in an engaging, vibrant and easily accessible manner. ... [Richard displays] an intimate and informed knowledge of the county’s rich cultural tapestry. ... [The book] renders accessible a particular sense of that place in a universal manner.”Béaloideas: The Journal of the Folklore of Ireland Society

“It will electrify anyone with a deep love of this part of the world who will be alternately chilled, intrigued or moved by Marsh’s ... sit-up-in-bed page turner. For here is a wonderful compendium of ghost stories, myths, legends, folklore and true (or possibly true) tales of buried treasure.” The Nationalist (County Carlow newspaper)

“Marsh’s style manages to mix an abundance of facts with a lively narration.” Books Ireland

From the Foreword by Dáithí Ó hÓgáin:

Every part of Ireland should have its Richard Marsh, and Wicklow is particularly lucky in this regard. He shows us that the heritage of storytelling is expressed in both literary and oral forms, making the landscape and the life of the various communities more colourful in the mind, more adventurous and fulfilling. As such it is of importance to the young as well as to the old, for a Wicklow person should be more interesting and entertaining, more socially expressive, if he or she can represent to the rest of Ireland and to the world a particular sense and a special atmosphere of Wicklow. ... Treise le Risteard, an té atá ag oscailt fuinneog na hoidhreachta dúinn agus ag ligint an tsolais isteach! (Power to Richard, who has opened a window on heritage for us and let the light in.)

The Naming of Baltinglass – An incident in the 1st-century BC story about the Demon Swine of Drebrenn is set in Baltinglass and gives the town its name.

The Melodies of Buchet’s House – Buchet, an inn-keeper involved in the Demon Swine story, is famously generous.

Saint Kevin and Glendalough – Migratory folk tales and local legends have become attached to the 6th-century historical founder of Glendalough.

Feagh McHugh O’Byrne – The last of the Wicklow kings; subject of the ballad “Follow Me Up to Carlow”.

Michael Dwyer – Rebel leader Dwyer prolonged the 1798 Rebellion in Wicklow by remaining at large until 1803. He survives in popular historical legend in Southwest Wicklow but is nearly completely unknown elsewhere.

The Hanging of John Moore – Moore murdered a landowner in 1798; the story survives in oral tradition in the Rathdangan area where it happened.

Hempenstall, “The Walking Gallows” – The facts behind the widely known (in Wicklow) ghost tale featuring an 18th-century vigilante.

The Vale of Avoca 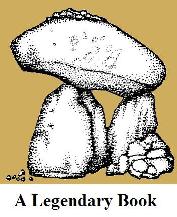 Back to Legendary Books