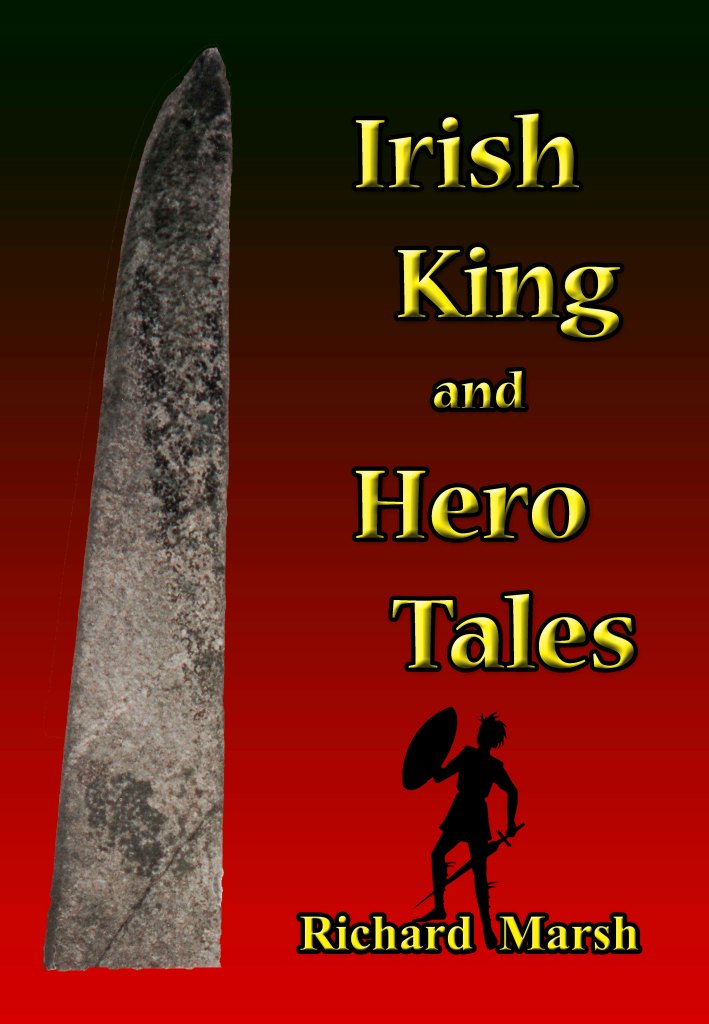 From most shops or directly from Richard Marsh

There is a bit of foxfire in Richard Marsh’s new book. Picking up a collection of Irish folktales from Richard Marsh always takes you deeper into a world that is far more diverse and complicated than you might believe, different from what is passed off in main-stream media as “Irish” storytelling.

In his book, “Irish King and Hero Tales,” Richard shares stories that might not be so familiar to the casual student of Irish legends. Depth is the value of this book. If you are looking for a series of quick stories you can tell at the “pub,” this is not your book. However, if you want to roll about in substance, blending a mix of folklore and history with merging boundaries, get this book.

Do not let us intimidate you into thinking that the text might be all academic. You will still get the grandness of Irish tales as you want them. You’ll find out what “foxfire” is, discover heroes so large that wolves are in their wounds and see arms hanging by sinews. You will know the tales of strong women who decide which men, if any, get her love and the imaginative power of “three steps” to safety that fills this volume of tales.

The book contains a mix of actual legends and stories along with good notes, reference and bibliography. If you are a student of story, these notes alone are worth the price of the book.
Staff at Storyteller.net 22 January 2013

Nine geasa (taboos) have been placed on Conaire, High King of Ireland in the first century BC. In revenge for his grandfather’s destruction of their mounds, the Otherworld Sidhe people will manipulate Conaire’s breaking of the geasa, leading to his destruction by Irish and British marauders and their druids.

The Champion’s Portion (The Feast of Bricriu)

Ulster heroes Cúchulainn, Loegaire and Conall vie for supremacy. This 8th-century tale is one of the finest examples of the colourful characters, wild imaginings, vibrant action and black humour that are characteristic of the Golden Age of Irish literature.

The Bórama (The Cattle Tribute)

When a Leinster king caused the deaths of the daughters of the high king in the first century AD, the high king imposed the Cattle Tribute on Leinster as compensation. For the next 900 years, high kings attempted to impose the Tribute with varying results, providing the thread that links a series of battles and other historical and legendary incidents until the time of Brian Boru – Brian of the Tributes. This version incorporates “The Battle of Allen” and “The Head of Donn Bó”, which are not part of the Bórama saga proper.

Seventh-century Leinster hero Maelodrán kills the two sons of the high king and coerces the king into pardoning him. Later, his wife, the daughter of the king of an enemy clan, plots with her father to kill him. Surviving that, Maelodrán is eventually killed by the king with his own spear. A year later, Maelodrán returns from the dead to kill the king with the same spear.

This side-telling explains how Maelodrán’s spear came to be identified as the demon-possessed guardian Spear of Belach Durgein, nowadays known as the Punchestown Standing Stone, which is pictured on the front cover.

Robert Bruce and the Spider

The Scottish king is inspired to mount one more battle against the English.

The Red Hand of Ulster

The bloody origin of the symbol.

The Battle Goddess of Clan Turlough

A goddess figure from the Otherworld threatens the enemies of Clan Turlough before two historical 14th-century battles.

The Pursuit of Diarmuid and Gráinne

A comprehensive version that incorporates the Kind Old Woman interlude from Munster oral tradition. Gráinne, young daughter of High King Cormac mac Airt, is betrothed to the aging leader of the Fianna, Fionn mac Cumhaill, but has fallen in love with Diarmuid, a handsome young Fianna hero. At the wedding feast, she puts him under geasa to elope with her, with tragic results.

A little-known 14th-century ballad, which tells how Diarmuid and Gráinne’s daughter avenged her father’s death. When she learns that Fionn was responsible, she leads her brothers in a battle against the Fianna and defeats Fionn in single combat.

A tree poisoned by the severed head of Fionn’s great-grandfather, Fomorian leader Balor of the Evil Eye, is used to make an impregnable shield called Ancient Dripping Hazel. It passes through many hands until Fionn inherits it and uses it to defend himself against Éachtach, who shatters it with her sword.

How Diarmuid Got His Love Spot

A woman from the Otherworld so admires Diarmuid for his great beauty that she gives him a love spot. Any woman who sees it falls instantly and completely in love with him, including Gráinne in another version of the Pursuit tale.

The Death of Fionn

Two versions: he slipped on a rock crossing a river and broke his head, and he was killed in the final battle of the Fianna in AD 284.

Caoilte Laments the Passing of the Fianna

After spending 200 years in an Otherworld sídh mound, Fionn’s nephew Caoilte returns to this world and meets Saint Patrick, who tries to convert him to Christianity.

Notes on the Stories

Additional information that didn't fit within the text.

Back to Legendary Books