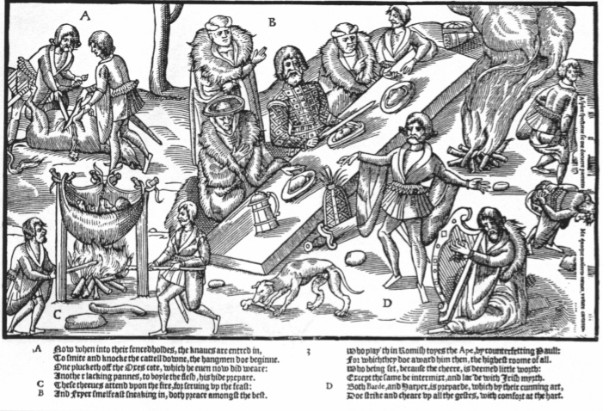 This satirical anti-Irish, anti-Catholic woodcut is frequently reproduced as a serious depiction of an Irish feast. The standing man labeled "B" is usually described as the poet, who is directing the reachaire/reciter/bard (D) in the performance of one of his poems, accompanied by a harper. But the caption clearly identifies him as "Fryer Smelfeast sneaking in ... counterfetting Paull".

Reproductions of this picture usually crop out the two men at the right mooning the storyteller. Their dialogue, written vertically, says, "Aspice spectator sic me docuere parentes" and "Me quoque majores omnes virtute carentes." That is, "This is how my parents taught me to behave as a spectator" and "All older people lacking in goodness taught me the same."

In A Guide to Early Irish Law (1988), Fergus Kelly suggests that the men are braigeteóirí (professional farters).

Back to Richard Marsh, Storyteller